The Kosovar Centre for Security Studies (KCSS), in the framework of the EU funded research project PAVE, organised a policy roundtable to present findings and policy recommendations from the PAVE research to the government, civil society and the international community. Around 30 people attended the roundtable, including senior public officials from governmental institutions and the Kosovo Assembly, representatives of religious institutions in Kosovo, teachers, experts from the P/CVE community, representatives from the EU Office in Kosovo, representatives from the international organisations such as OSCE, etc.

The roundtable was organised into three main parts:

The panel members Mrs. Mehmeti Selimi and Mrs. Gerbovci, welcomed the recommendations and the findings from the PAVE research, and hailed the quality of the working paper 5. Member of Kosovo’s Assembly, Mrs. Mehmeti Selimi, said that the PAVE report and recommendations should contribute towards the policy-making process of the government on preventing and countering violent extremism. Mrs. Gervoci, stated that some of the recommendations concerning online (de) radicalisation will be considered in the current process of development of Kosovo’s cybersecurity strategy, while other recommendations will be considered in the ongoing process of preparing a new programme for reintegration and rehabilitation of the radicalised individuals.
During the open discussion, the representative from the Islamic Community of Kosovo (ICK) welcomed the report and the recommendations and highlighted the importance of working with the media to better organise public debates on religious issues and to combat the spread of disinformation. A former senior official from the Ministry of Education, and a principal of a high school in Kosovo, stressed the importance of the recommendations of the PAVE project to support critical thinking skills among students and to introduce a subject on media education in the schools. 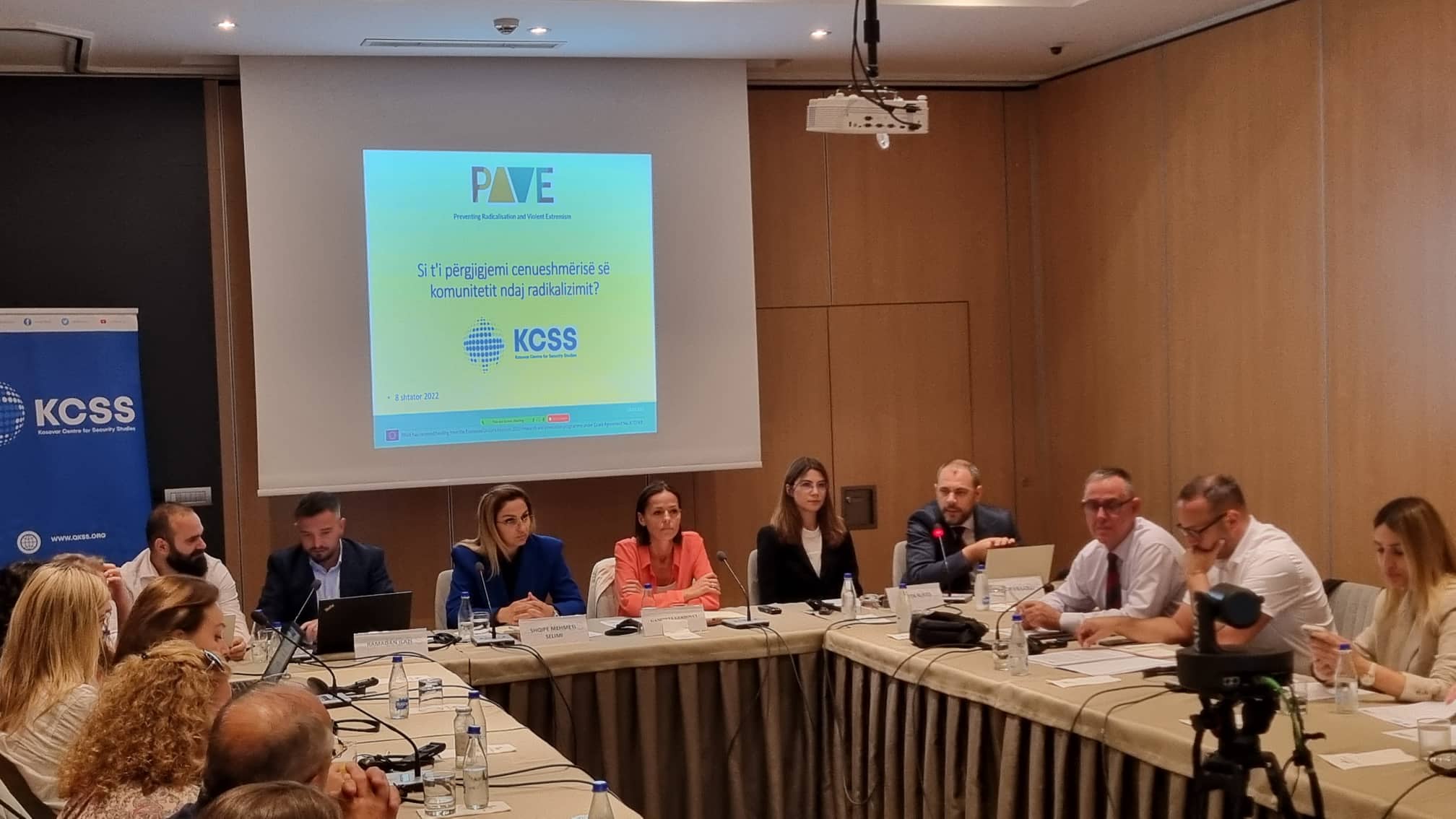 Representatives from the international community in Kosovo focused their discussion on the recommendation of the PAVE research that suggests to avoid a securitised approach towards P/CVE and on the findings of working paper 5 relating to the discourse of the international community on radicalisation and violent extremism. The researchers from KCSS noted that Kosovo should not blend policies and strategies of radicalisation and violent extremism with terrorism and there should be separate strategies, in order to recognise that radicalisation is a complex and mixed process that involves cognitive aspects, as well. The representative of Kosovo Protestant Church stressed that Kosovo has not yet fully resolved challenges of violent extremism, although significant progress was achieved. He further noted that it is vital for Kosovo to approve the Law for Religious Freedoms, which is highly advanced and it is pending approval by Kosovo Assembly. Another recommendation from the PAVE project that was supported includes the call for the government to decentralise the policies on (de)radicalisation and countering violent extremism in order to increase support and empower the municipal authorities. Government officials in the roundtable agreed to take this recommendation into serious consideration.

The full policy brief for Kosovo can be accessed here.